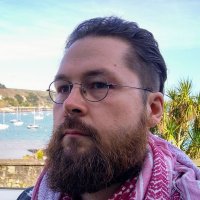 Dr Swen E. Gaudl is a Lecturer in Computer Science at the University of Plymouth. His research interests are to broaden knowledge on the understanding and replication of animal behaviour and agent design. This includes creating novel concepts for social robots and testing the limits of those concepts. He is working on non-zoomorphic robotics and the conceptualisation, design, and development of both physical robots and robotic behaviour. Previously, he spent 2.5 years as a Research Fellow as part of an ERC grant at the Metamakers Institute in Falmouth. He holds a PhD in Computer Science from the University of Bath, on the subject of advancing the development tools and approaches for creating better character AI for digital environments. Before his PhD, he was a researcher and project manager at the Fraunhofer Institute for Digital Media Technology, Germany.

Alexandre Colle is an industrial designer specialised in robotics, as well as principal human robots interaction designer at Small Robot Company. Alexandre started in 2019 a PhD in human-robot relationship at Edinburg robotic lab in september. His practice and research focus is on the aesthetics and integration of robotics and Iot. His background is as entrepreneur (APOLOGIE Paris, Hotel Particulier Montmartre Paris) with 15 years of experience in fashion, luxury and lifestyle (Versace, Gaspard Yurkievich). Mr Colle holds a B.A. in Fashion and Luxury Goods at the University of Perpignan.

Our goal is to create robots that can be both: meaningful devices for humans, as well as leave a legacy in design and aesthetics. We deserve to be surrounded by a new breed of robots going beyond commercial purpose, and promote an ethical deployment of these very complex artefacts. We have a strong interest in developing a multidisciplinary team, and promote a better collaboration between engineering and design, for the benefit of robotics.

Grav was with by Trilby Media.